skip to main | skip to sidebar

Petanque, Boule or Boccia – different names to the same play or game. Very popular in France and in the Mediterranean.
I learned it many years ago – in France. Looks so easy. Yeah, it’s easy in the way that everybody can play it and have it as a very social hobby. But when you play against those who really know how to play the game and handle the “Boules”, you’ll soon find out it takes more than luck to win. It’s about training, experience, tactics, precession, and to understand the surface you are playing on. In many ways, you can compare it with Curling. Except for: There is no fixed “Home” or playing distance and the surface is never the same. Home in Curling and related plays do have a “Home Center”. To start with, you have that in Petanque as well. But the distance and direction varies from play to play.

The winner from last round throws away “The Pig” – Couchon. That’s the small ball, made of Wood. And the winner team can throw it in what direction or how far (within agreed upon limits) their representative want. Then the same rules as in Curling applies. But “The Pig” can of course be hit, and moved to another place; same of course with the competitors steel-balls.

The point is to come closest to “The Pig”. After all “Boules” are thrown, it’s measured up which team have come closest, second etc. If the team with the closest also have the second closest, then it two points… etc. You, my dear reader, do understand the rules of this play even kids can do with pleasure. That’s why I like it. It’s a play for all generations. Eliminates the generation gap. And played well from your part, your kids and grand kids can be winners. It's one of the best social hobbies there is, that can involve several generations seemless.

Petanque: (fr) Balls made of steel (normally) – In some Families it’s a Birth-gift to boys.
Each player have two “boules” or “Balls”. You buy sets of pairs – often 2-3-4 plus a Pig and a measure band. Each pair do have different patterns – and even weights (if preferred).
Boule: (fr) Balls made of Wood
Boccacio: (it) Balls made of everything from cheap plastic to …
Play you too
Posted by TorAa at 3:13 PM 8 comments:

In old Nice with borrowed Feather – due to square headed bodies 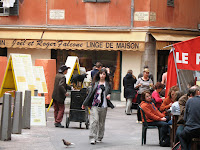 I have been to Nice a couple of times before. First time in 1966. What has changed the most in downtown Nice, is the traffic. They are now building a new tramway (Street Car) system to help up the situation – but no park and ride system (sic). And all the small villages in the neighbourhood,

have grown into a more or less part of urban Nice. Expect traffic jam. Even out of season. If you go there by car.

Hakon I went up the Promenade des Anglais, and found a parking house. Then walked into Old Nice. The 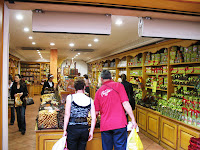 narrow streets with all the shops and small market places with outdoor cafes and restaurants, churches and galleries are really charming. All streets have a French name and a Provencial Name (the old local language in Provence).

We had lunch at the Flower Market, close to the sea. Fish of course. And some white wine.

(Fortified Castle) and old cemeteries (Graveyards – The Catholic, The Protestant and The Israeli an). It is very steep to climb – even with stairs. But it’s worth climbing (If you do not want to walk up, it’s a lift on the south (sea) side.). On the top, it’s a wonderful view over Nice, the city, Baie des Anges, the mountains (Alpes Maritime) and the Ocean.

I could do this wonderful excursion thanks to borrowed feather – from Hakon. Since my luggage was left at Oslo Airport – due to the new security regulations. Yes, I was 10 minutes late for regular luggage check-in. I admit that. That’s my fault. But before, it was no problem to send checked 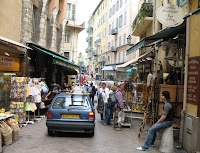 luggage with the next plane. Now, you and your luggage have to be on the same plane. BUT, if the air-port does a mistake, and your luggage do not “reach” your connecting flight, then your luggage travel “alone”. This is politics and have nothing to do with reality.

Just check the luggage as usual, and put on the next flight. It’s still allowed to be reasonable and service minded and at the same time maintain security. Only square headed bodies sticks to this kind of misunderstood “solutions”.